As the year is slowly coming to an end, we have taken a look at the Best Freeware 2019 for X-Plane 11.

Our listing Top 10 Freeware 2019 for X-Plane 11 makes no claim to completeness and does not represent a ranking. If a recommendable add-on should have passed us by, we are always happy to receive relevant information via our contact form.

Freeware to go vertically into the air was available this year from Alex Gifford, Ben Russell and Brett Sumpter. They converted their old Hughes MD500D, originally made for X-Plane 8, to X-Plane 11. The mod finally released by Joe Kipfer rounded off the package at the end and so we now have a really recommendable freeware helicopter for X-Plane 11.

A scenery on the payware level was created last year by X-Codr Designs and AeroDesigns. Both studios actually only develop paid products, but in 2019 they gave themselves a push and delivered this wonderfully remote airport somewhere in the middle of nowhere. And that even as freeware.

Joe from FLY X Simulations is another designer who develops not only payware but also freeware. With the airport Lanzarote on the Canary Islands he has released a very popular holiday destination for free this year. Even PBR textures with 4K resolution and a modeled terminal interior are included.

Beirut XP by Lebor Simulations was certainly one of the best rated downloads for X-Plane 11 this year - no wonder, after all, the development team has recreated the entire urban area in the Paris of the Middle East in detail and also implemented the associated airport. 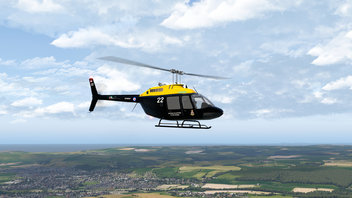 Helicopters enjoy great popularity in X-Plane 11. This includes the Bell 206 JetRanger by Joe Rowe, who is continuously developing his project. The current Beta 4.15 even supports Force-Trim and the popular AviTab.

The PWDT development team has made a name for itself in the past with a large number of great aircraft from the former Eastern Bloc. Consequently, the Yakovlev Yak-18T as the first add-on of the designers for X-Plane 11 was a real hit. Beautiful model, sharp textures and a rich sound - everything is fine here!

This year PuffinFlight has released three lovingly designed grass pitches in the Polish Lower Silesia as freeware. Because the airfields are relatively close to each other, the package is perfect for relaxed flights in the evening. Thanks to the many sights like the castle Fürstenstein there is also a lot to discover.

In this window settings in Ortho4XP can be made. Especially important: Defining the folder of overlays. John Jensen of Vidan Design has ventured on X-Plane 11 for the first time this year. To test it, he converted Grenaa Airport in East Jutland and released it as freeware. If you are interested in the small airfield in Denmark, you can buy the scenery in the shop of Vidan Design - for 0.00 Euros.

The main screen of Ortho4XP. In v1.3.0 this looks different than usual. Let's go into the bush: Propstrike Studio has modified the Cessna 172 from Laminar Research a little bit and made it suitable for bush flying. In addition to thick tundra tires there is also a version with tail wheel landing gear, an Angle-of-Attack-Indicator in the cockpit and plenty of cargo in the cabin.

The so-called Earth Tile Map from Ortho4XP, on which the desired areas are marked. Under the pseudonym monoblue, Stefan Schrön has released the tropical rainforest in the Thai province of Krabi as freeware for X-Plane 11. This is a semi-fictional scenery that was created in cooperation with Matthias Seewald of Maps2XPlane. For reality purists this is probably nothing, but everyone else will surely have fun in Krabi.